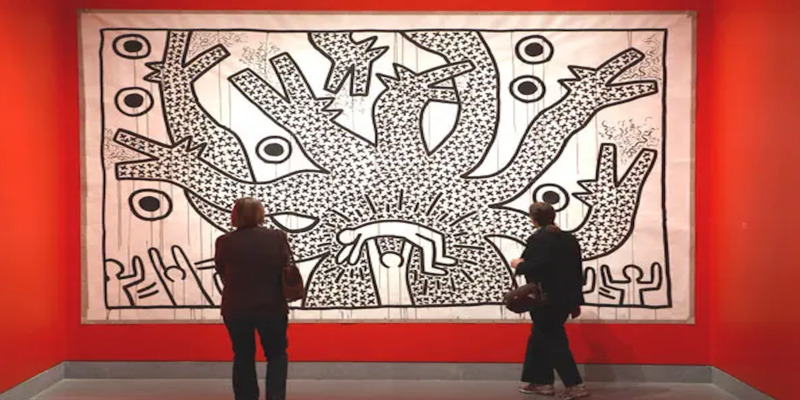 The early works of this important figure in pop art were on display at a Keith Haring exhibit. Patricia Field from Sex and the City, Rosie Perez, David LaChapelle, Courtney Love, and others visited the Brooklyn Museum to check what was new.

The artist first gained notoriety for his unusual chalk graffiti artwork in New York City's subway system before going on to become a famous muralist who even provided artwork for Sesame Street, the star-studded charity album "A Very Special Christmas," and Swatch watches.

For the first time, the public may now see early works by Haring thanks to a new exhibition at the Brooklyn Museum of Art. The first major exhibition to focus on the early years of Haring's career charts the evolution of his unique style, which uses rounded stick figures filled with a vitality that seems to emanate directly from the city he knew and loved.

Seven videos, including Painting Myself into a Corner and Tribute to Gloria Vanderbilt, as well as collages made from torn-up bits of his own writing, history textbooks, and newspapers are among the works on display in this new exhibition.

This provocative installation, which consists of two enormous movies, explores the politics of oil from the Chicago Mercantile Exchange trading floor to a violent Nigerian organization that opposes exploitation and environmental degradation in the name of energy.

Despite their apparent differences, these two micro-communities are linked by a shared goal to dominate petroleum, whether through speculative investing or terrorism.

Although the two films appear to be documentaries at first look, Boulos himself has referred to his work as anti-journalism and claims that he attempted to transcend reality with this installation.

Decide for yourself after viewing it!