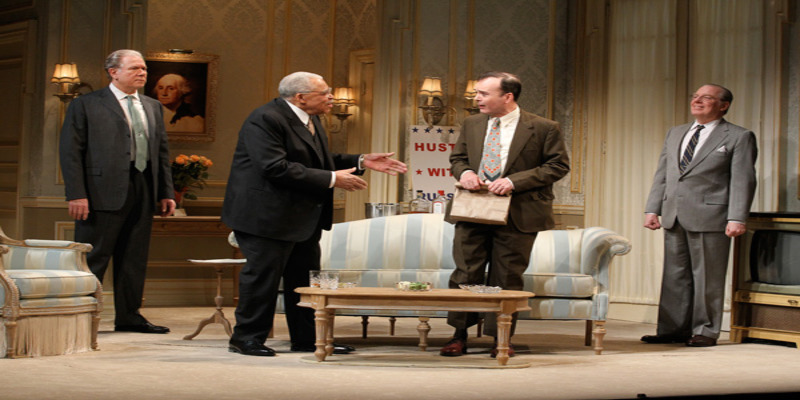 The Best Man is the undisputed favorite to have the most famous people show up in a single Broadway production. The latest production of Gore Vidal's 1960 political drama is currently showing at the Gerald Schoenfeld Theatre for a brief run, although there aren't many recognized faces.

There are numerous award-winning TV performers on the marquee, including Eric McCormack (well known for playing Will in the TV series "Will & Grace"), Candice Bergen ("Murphy Brown," of course), Angela Lansbury ("Murder She Wrote"), and John Larroquette ("Night Court").

While James Earl Jones has received two Emmys for his work in television, many still recognize him as Darth Vader's voice. You won't know where to look to see all five celebrities on one stage!

With two actors who have won multiple Tony Awards (Jones and Lansbury) as well as John Larroquette, who won a Tony last year for his work opposite Daniel Radcliffe in How to Succeed in Business Without Really Trying, this is the strongest ensemble group on Broadway.

The Best Man chronicles the story of two contenders vying for their party's presidential candidacy at a convention in Philadelphia in 1960. The Best Man, a play by one of America's greatest playwrights, contains enough surprises to excite any theatergoer or political junkie.

One good and one bad candidate for president are portrayed by Larroquette and McCormack (you can guess who the bad candidate is!). The drama's darkly comic undertones are also given proper credit, especially with such seasoned comedians as Bergen and Lansbury on the cast list.

The Best Man demonstrates that American politics have not altered, despite the fact that it was written 50 years ago. Who wins, the best guy or woman? Not usually, but with The Best Man, you can't go wrong.

Which candidate—McCormack or Larroquette—would you pick if you had to cast a vote?

Don't miss out on the best shows and events in NYC! Check out the list below for more great entertainment.