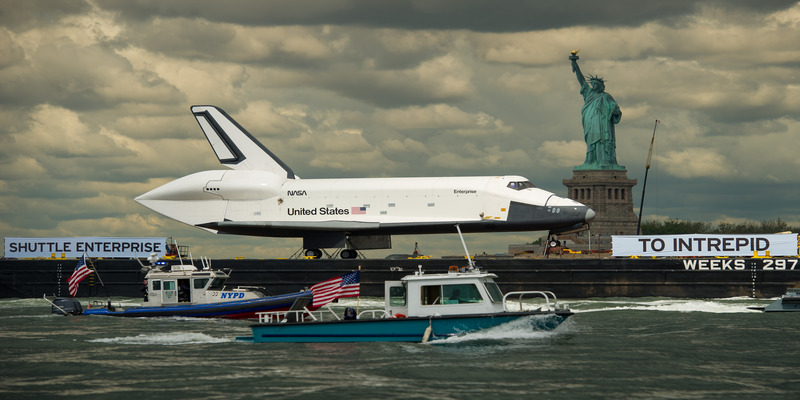 The arrival of the Space Shuttle Enterprise to its new home at the Intrepid Sea, Air, and Space Museum in New York City has been postponed due to bad weather on the East Coast.

The space shuttle was visible in clear weather as it flew past New York landmarks like the Statue of Liberty. This minor delay gave New Yorkers and tourists a better chance to see the unusual sight of a space shuttle riding atop a carrier aircraft at a low altitude. Even in New York, you don't see anything like that daily.

According to NASA, the low-altitude fly-over provided amazing photo opportunities for spectators in NYC from lower Manhattan locations, calling the flight "the world's greatest piggyback ride."

The Statue of Liberty in New York Harbor and Intrepid, on the west side of Manhattan near 42nd Street, are both anticipated to be passed by the Enterprise. Any location along the Hudson River should provide excellent viewing opportunities for the thrilling event.

The Enterprise was gently transported on a barge up the Hudson River to the Intrepid, an aircraft carrier that houses New York City's top military and naval museum, several weeks following its arrival at JFK.

The Enterprise was most recently on exhibit in Virginia at the Smithsonian National Air and Space Museum. The Enterprise, the first NASA orbiter, was constructed in the middle of the 1970s to conduct test flights for the Space Shuttle Program. Never did it fly in space.

Take a look at the list of attractions in NYC below and consider planning your next vacation in the city that never sleeps! With so much to see and do, you're sure to have a memorable time.