New York City (NYC) is home to millions of U.S residents. Although the city is known for being an urban concrete jungle, there are several prime spots in the city that New Yorkers can visit to relax away from the bustle of the city.

Each of these New York City parks have their own characteristics that make them unique.

You can get a park for almost all activities whether you are looking for a space for ice skating, hiking, concerts, or movie screenings.

If you are new to New York City, here are some of the best parks you can visit. 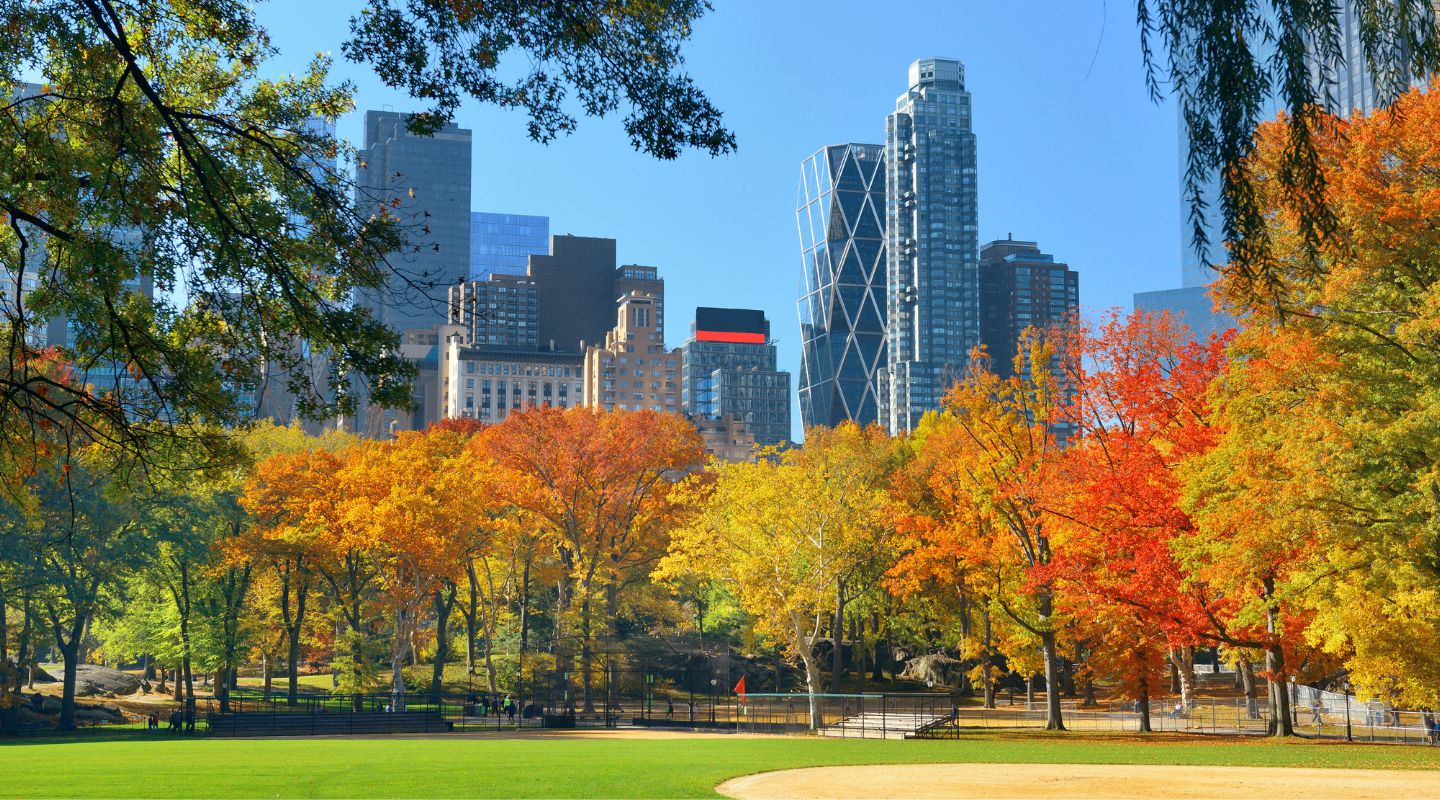 You can’t talk about parks in New York without mentioning Central Park . It's the most popular and one of the biggest parks in NYC. It's on the must-visit list for most tourists who come to the city.

Spanning more than 840 acres, Central Park has about everything you could find in a park from playgrounds and picnic areas to recreational and public art facilities.

The green space is ideal if you want to take a break. In addition, it's fun for families; you can take kids for boating or visit the museums in the park. 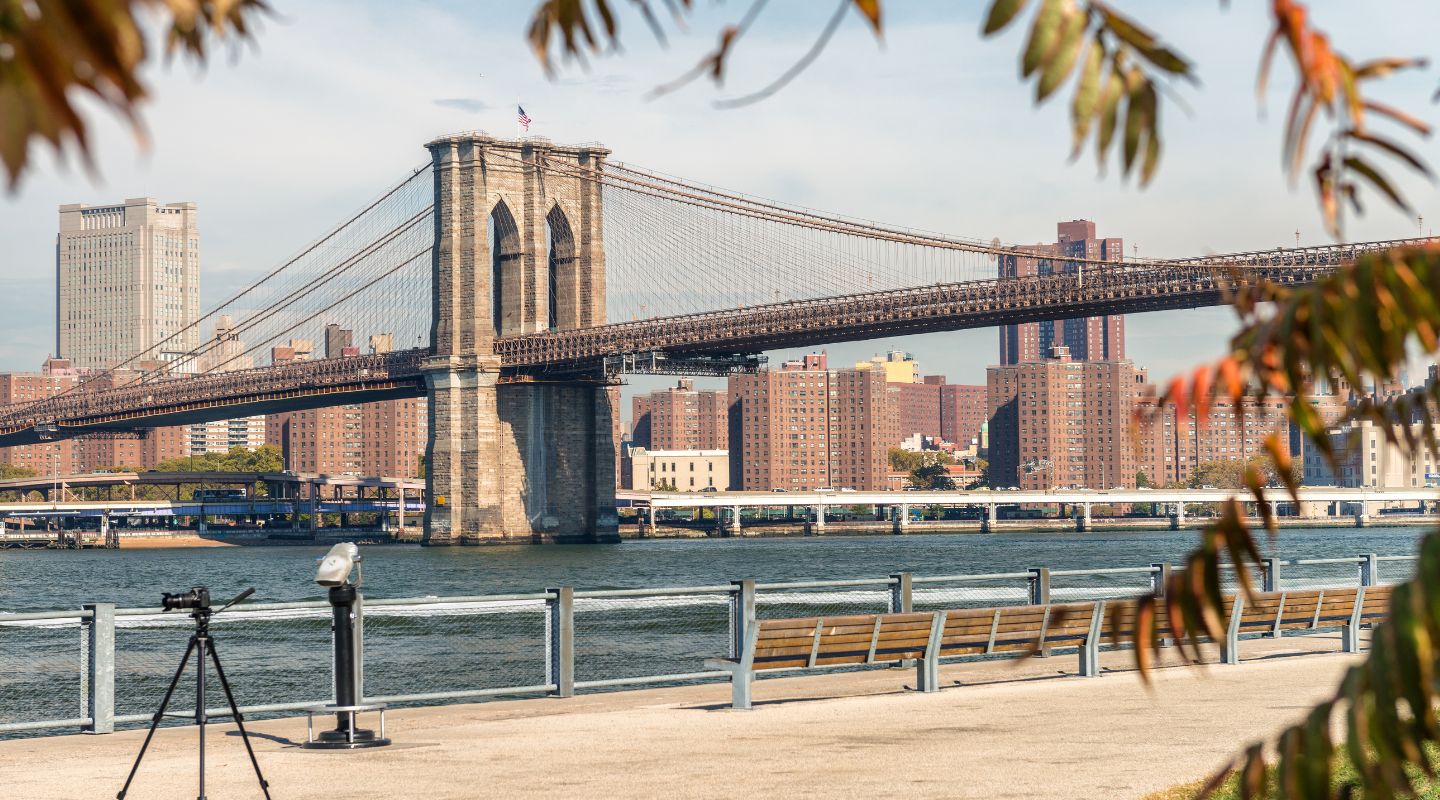 Brooklyn Bridge Park is an iconic park a nd one of the most famous parks in New York City.

Located under the Brooklyn Heights Promenade, along the East River, it gives stunning views of the Manhattan skyline.

Occupying more than 80 acres, the park is divided into different unique sections with sports courts and several playgrounds if you have younger children. 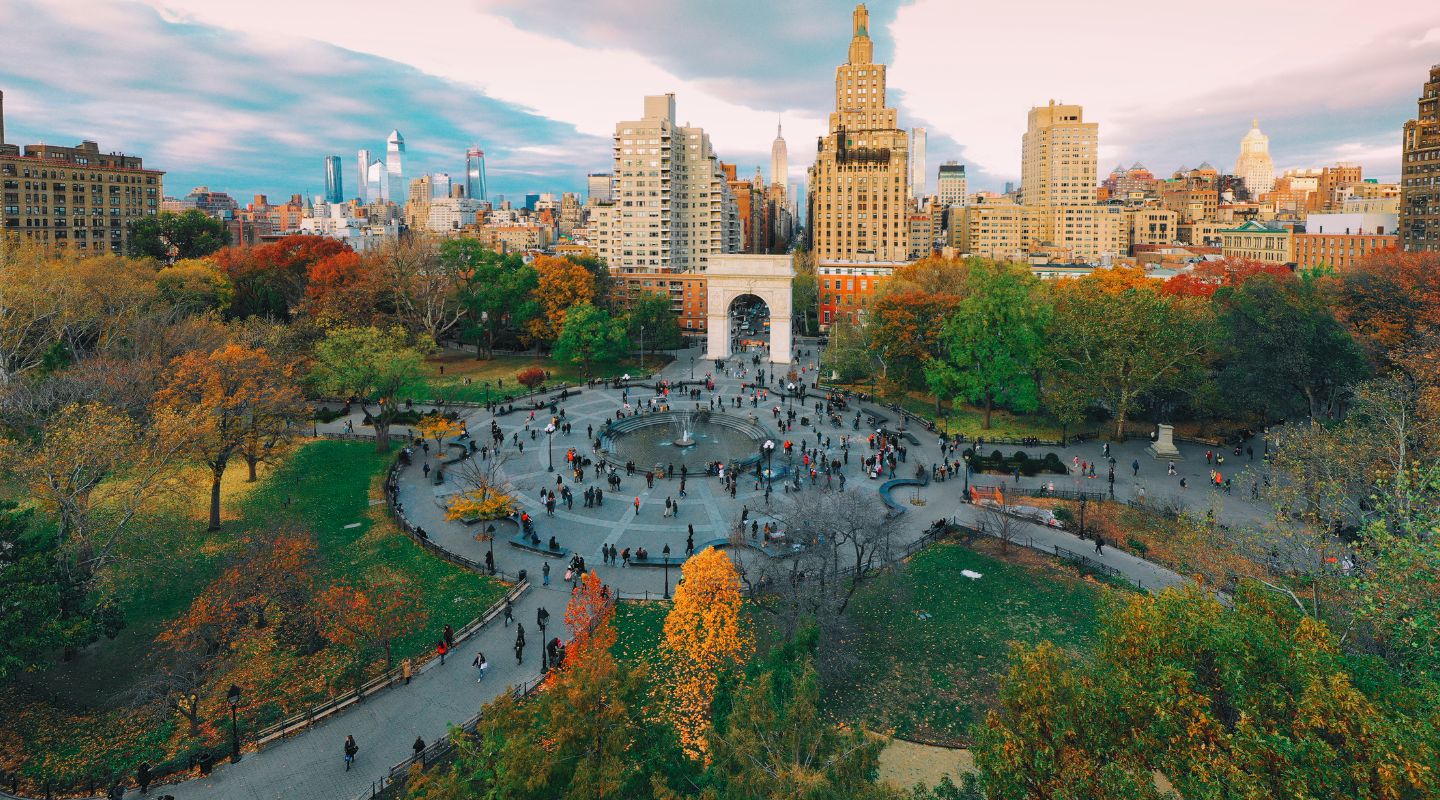 If you are looking for a beautiful New York City park, you should definitely visit Washington Square Park .

This park is located in Greenwich Village, along Fifth Avenue. It’s renowned for its famous gateway marble arch, which was modeled after Paris’ Arc de Triomphe.

One of the main areas of the park, the Washington Square Fountain holds most activities. It's common to find street performers entertaining the crowd at the park. 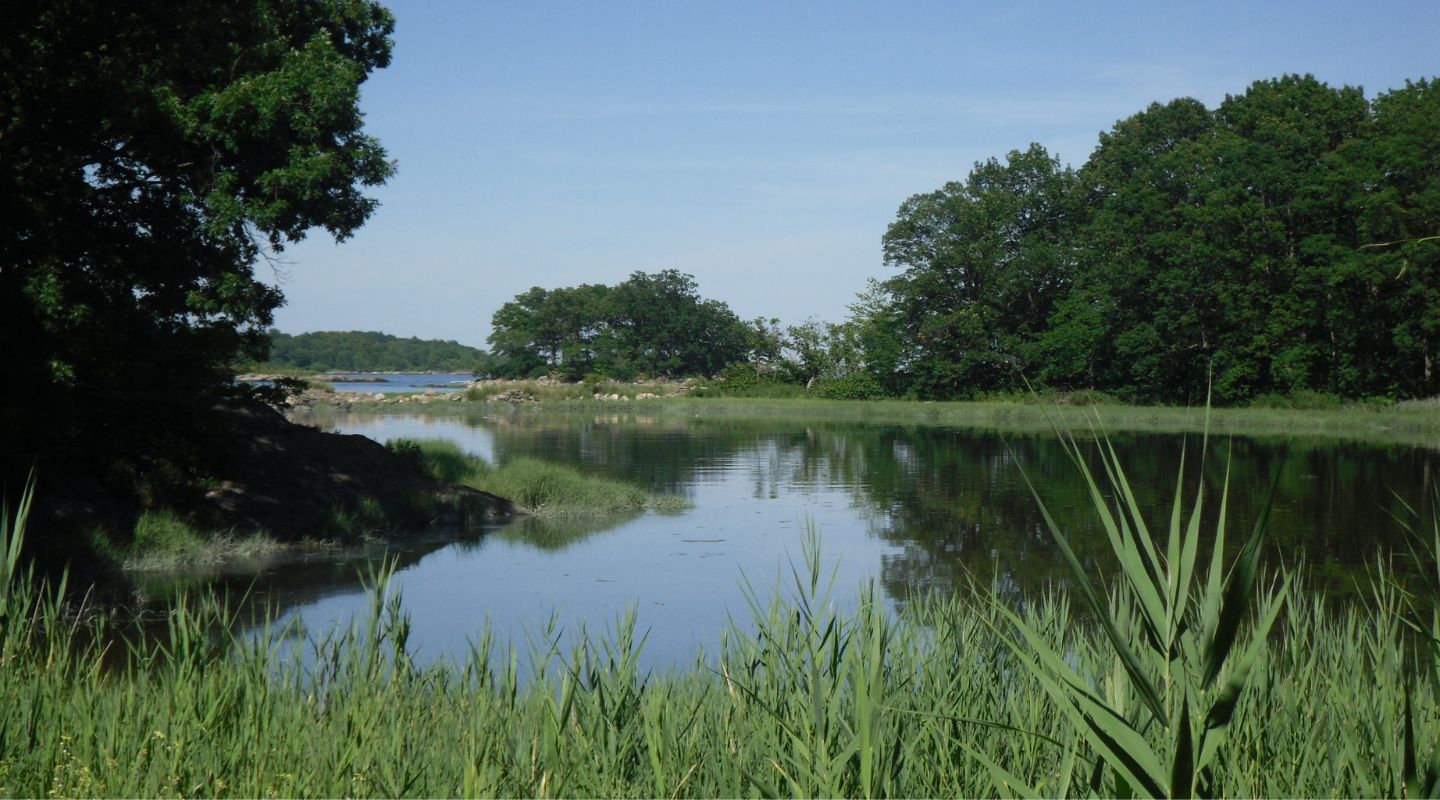 Spanning over 2,700 acres, Pelham Bay is the largest park in NYC and is three times the size of Central Park. It's a popular destination for bird watchers and nature lovers.

The park has a tennis court you can use, playgrounds, two golf courses, and multiple sports fields. You’ll also appreciate the nature trails and sanctuaries. 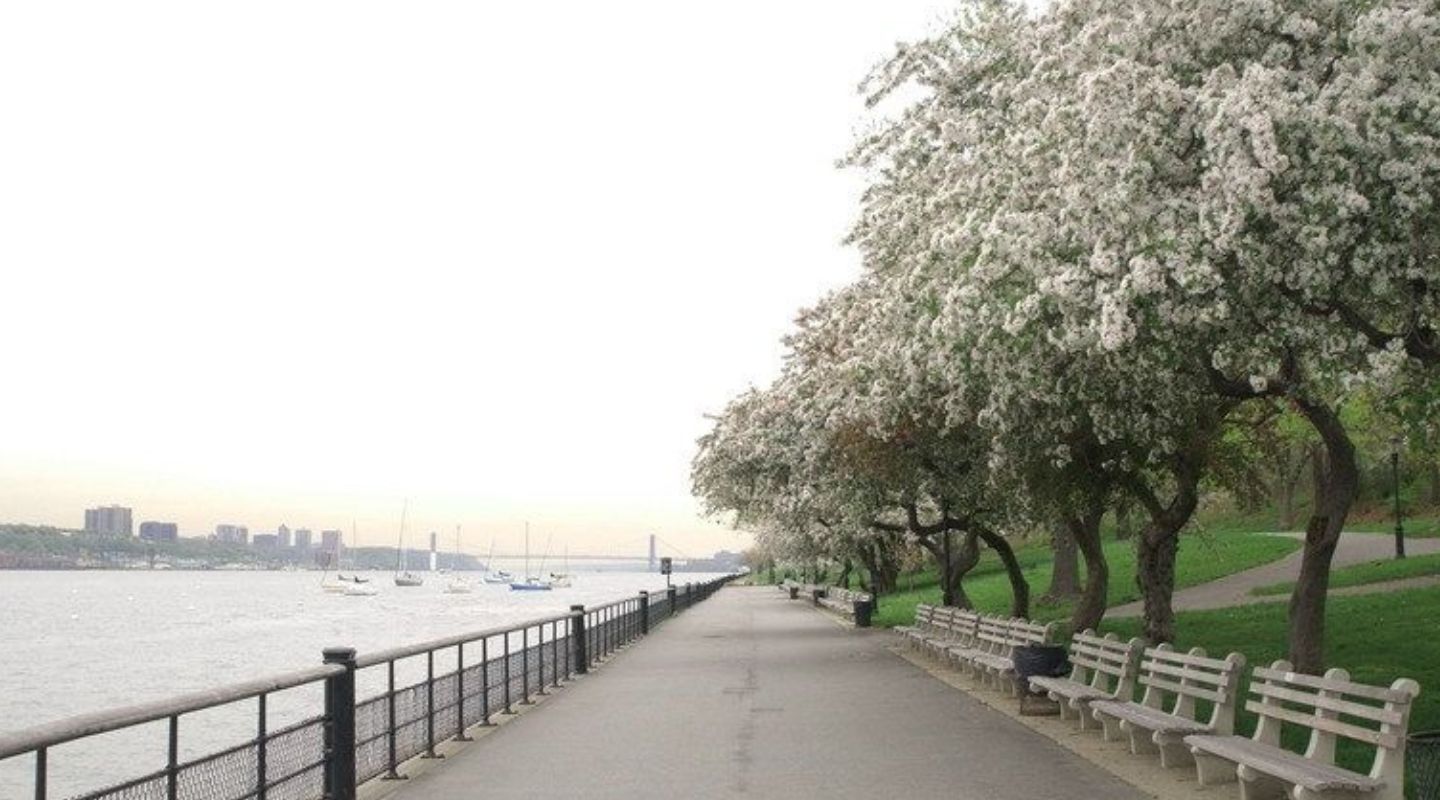 Although smaller than other parks, Riverside Park is one of the best NYC spots if you are more into nature.

This park sits along the Hudson River in the Upper West side and is popular with birdwatchers. It was also designed by Central Park developers Frederick Law Olmsted and Calvert Vaux.

The facilities available include sport courts, a skate park, bike paths on the Manhattan Waterfront Greenway. 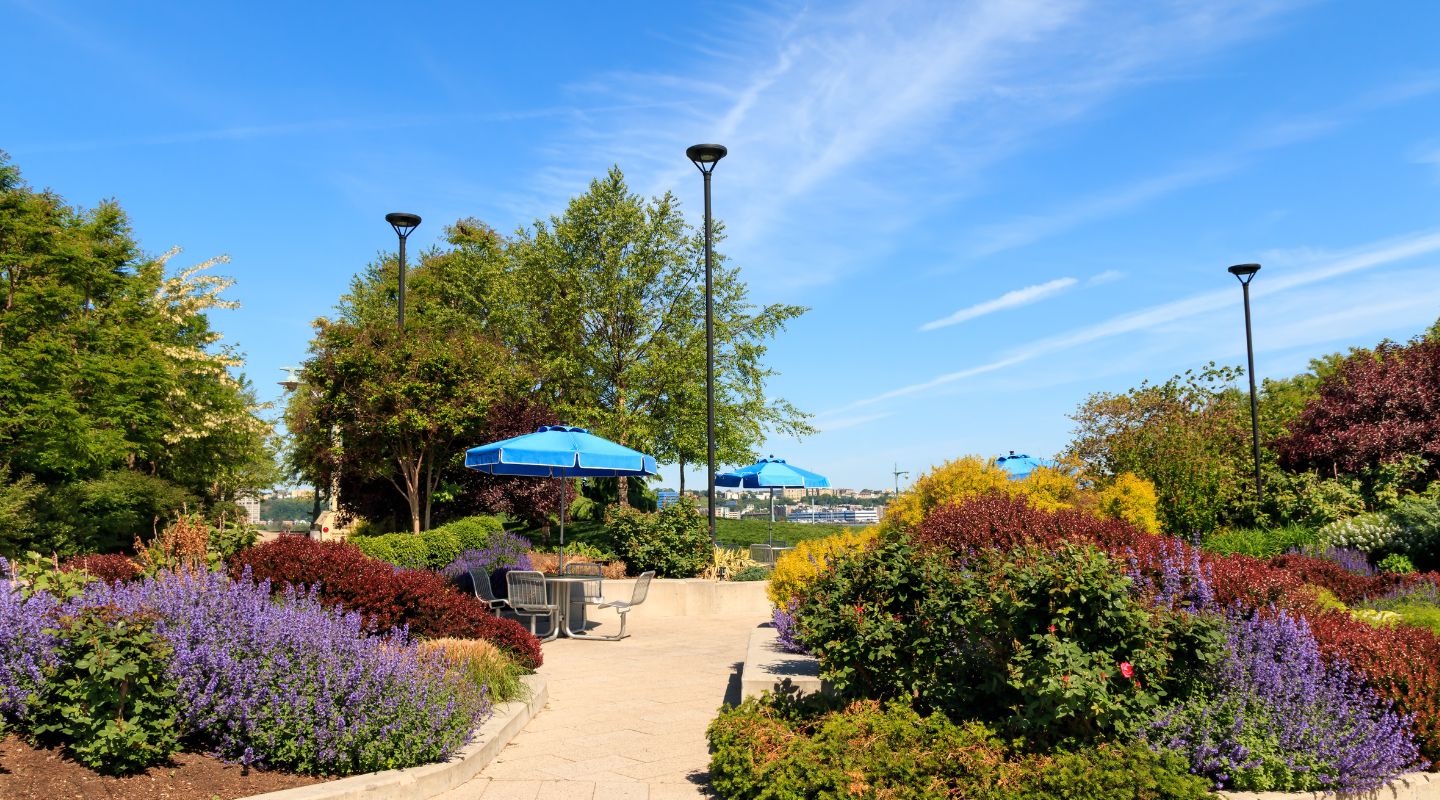 Hudson River Park is also a great place to visit either by yourself, with friends or kids. This waterfront park stretches from Battery Park all the way to 59th Street.

Some of the amenities at this park include biking paths, soccer fields, and batting cages. Additionally, there’s a dog run for pet owners and a playground. 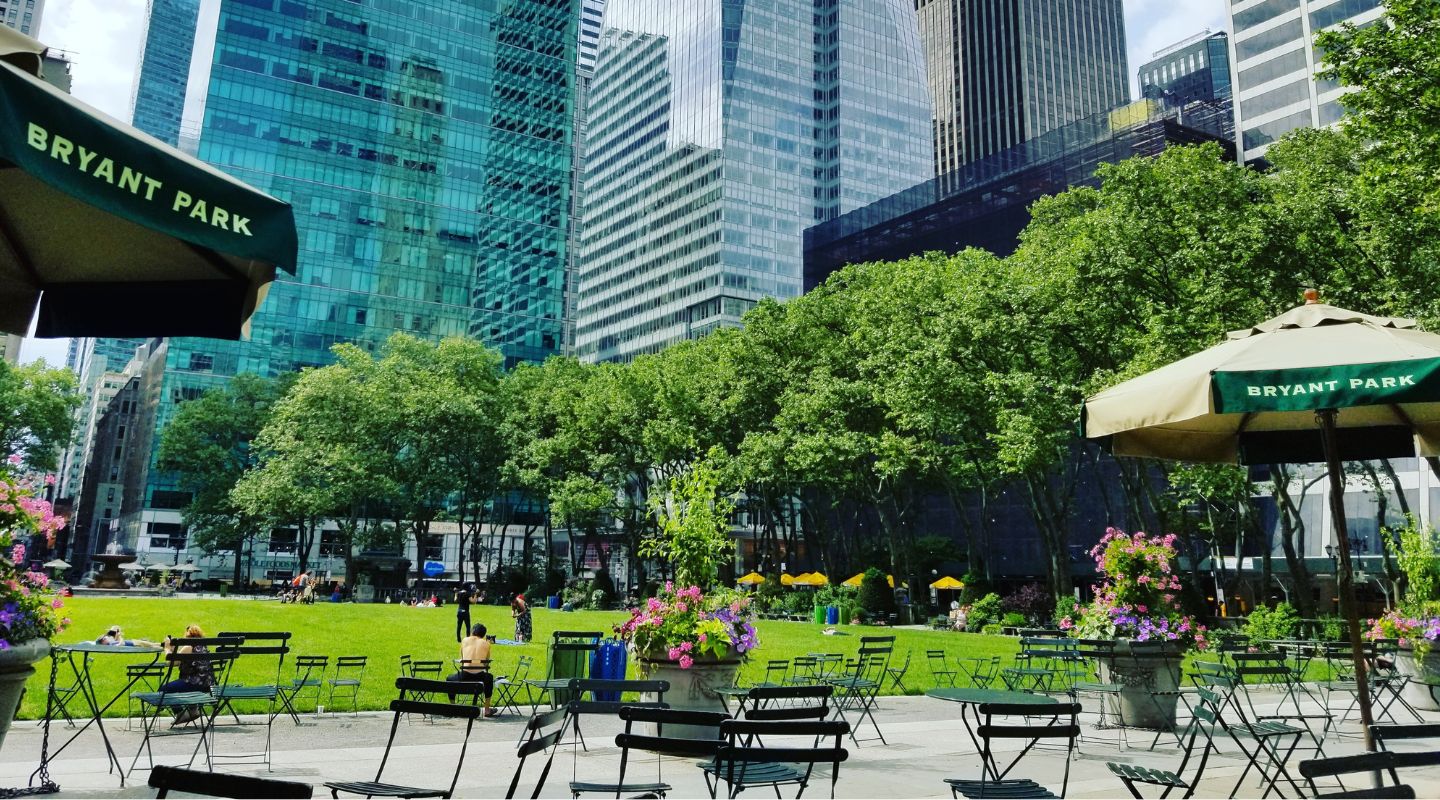 This NYC park is strategically located on Fifth Avenue behind the New York Public Library.

It has a large, manicured lawn that’s a perfect picnic spot. During the summer time, the site is used for community movie nights.

In addition, you should look out for the ice skating rink and pop-up shops in the winter village. 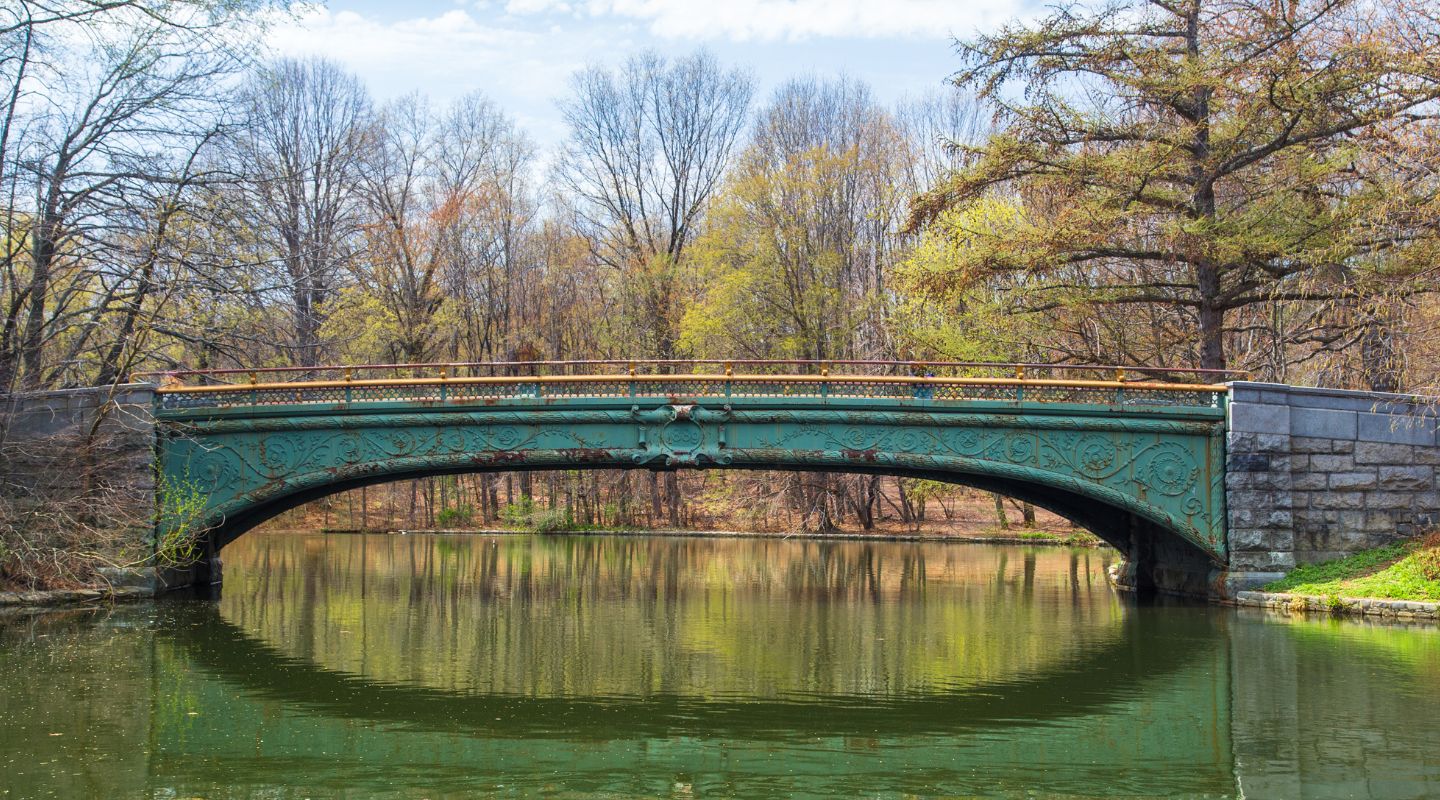 Since it was designed by the same developers as Central Park, Prospect Park is covered with great lawns, lots of green spaces and historical landmarks.

The Long Meadow section is popular with families because of the playgrounds, while the Picnic House and Prospect Park Bandshell hosts free summer concerts. Families also visit the Prospect Park Zoo to see the animals. 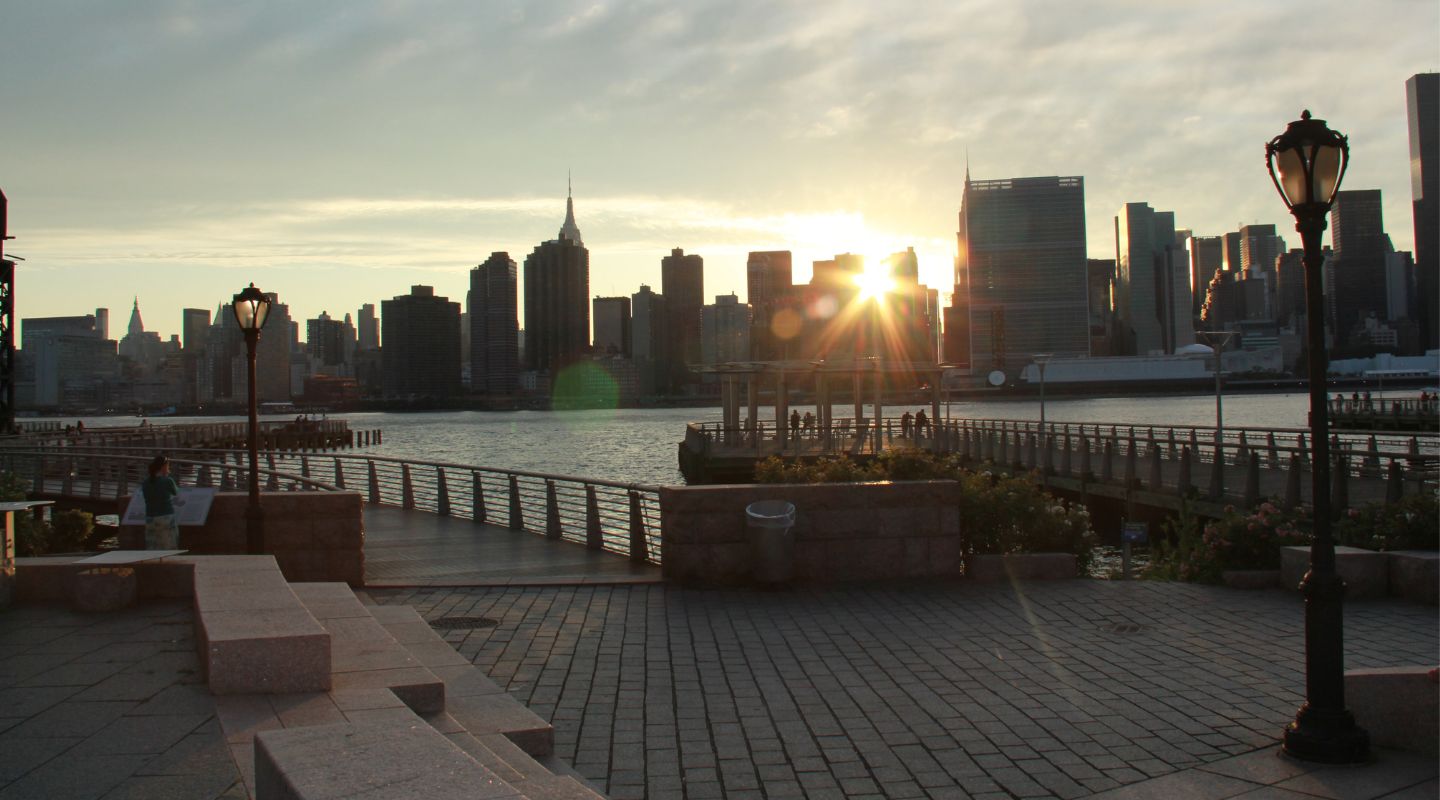 This park overlooks the New York harbor; therefore, it's a must visit when you are in the city.

It has historical significance as the first immigration center in America even before Ellis Island.

The scenic park has woodlands, a main lawn, an urban farm, and a ferry terminal where you can hitch a ride to Staten Island or take a tour of the Statue of Liberty. 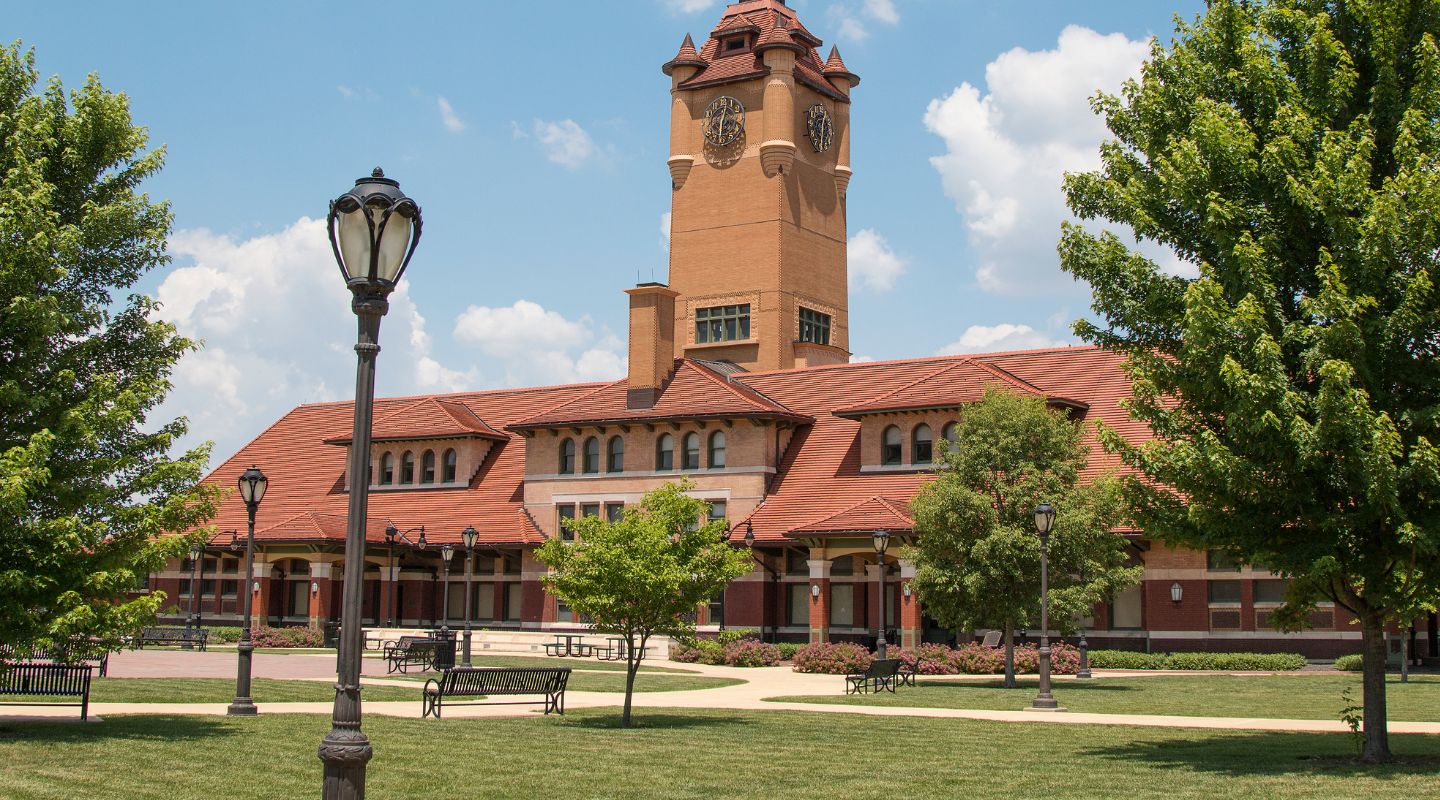 Union Square Park is one of the best parks in NYC for people watching.

Historically, this park has been at the center of various protest movements in the city. 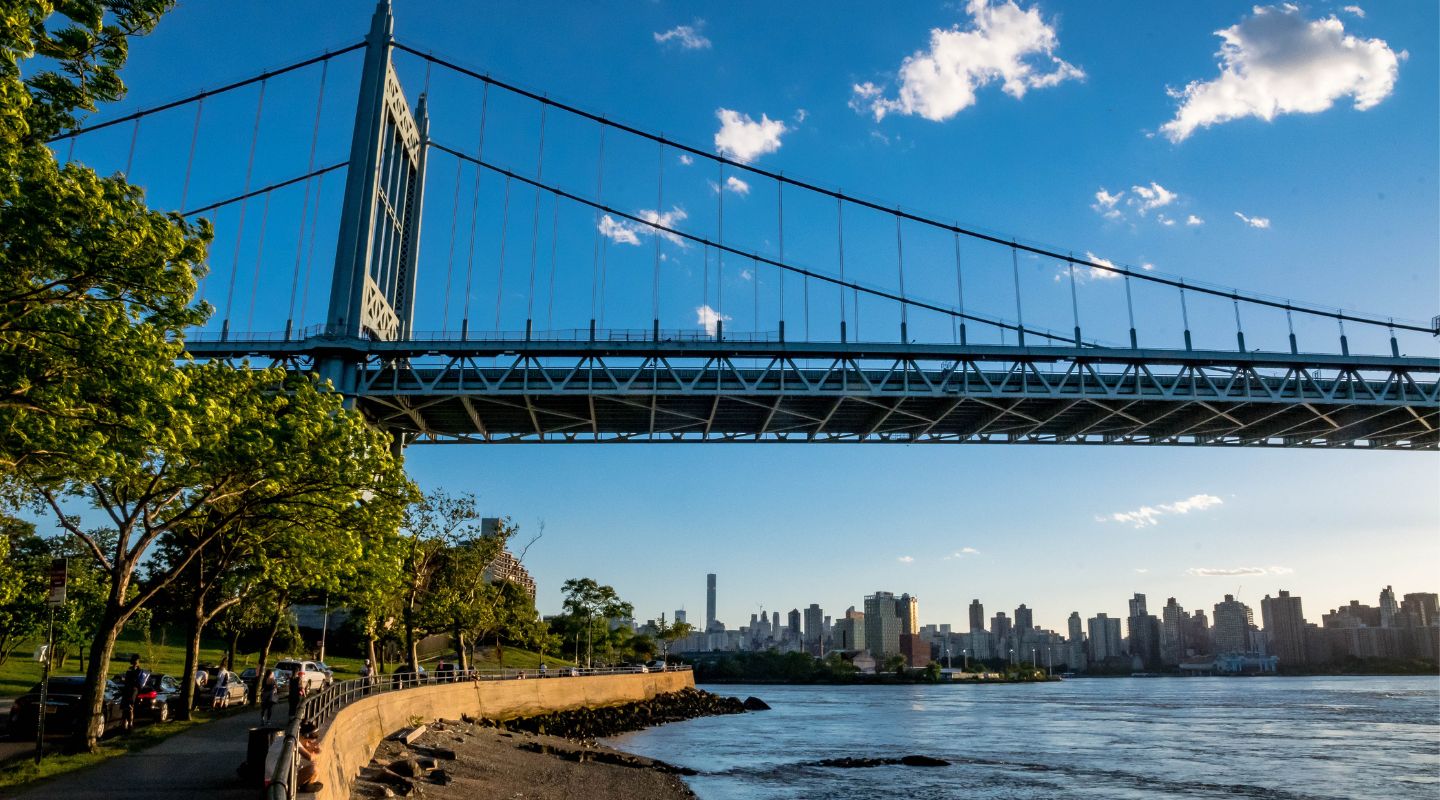 Astoria is one o f the best NYC parks in Queens. It’s renowned for its public swimming pool which is the oldest and largest in the city.

This makes it perfect for swimming during summer.

Apart from the pool, you can find other facilities such as on-site tennis courts, running track, bandstand, walking trails, and playgrounds. 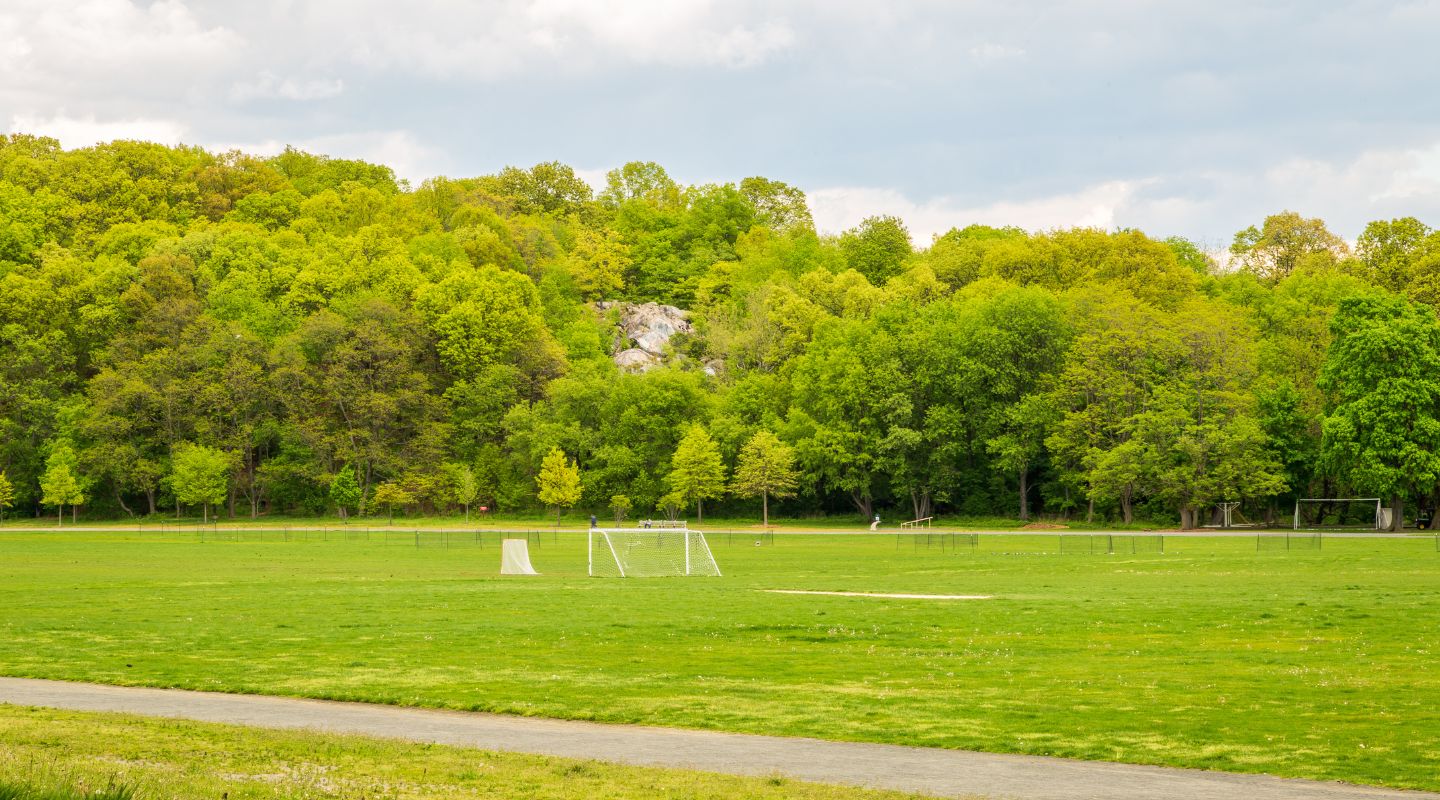 Van Cortlandt park is one of the bes t NYC parks in the Bronx area. It's a perfect place to practice sports as well as outdoor activities if you are looking for a walking path.

It’s also home to more than twenty miles of hiking trails if you are looking to unwind.

Additionally, if you are into history, you should visit the Van Cortlandt House Museum; the oldest building in the Bronx. 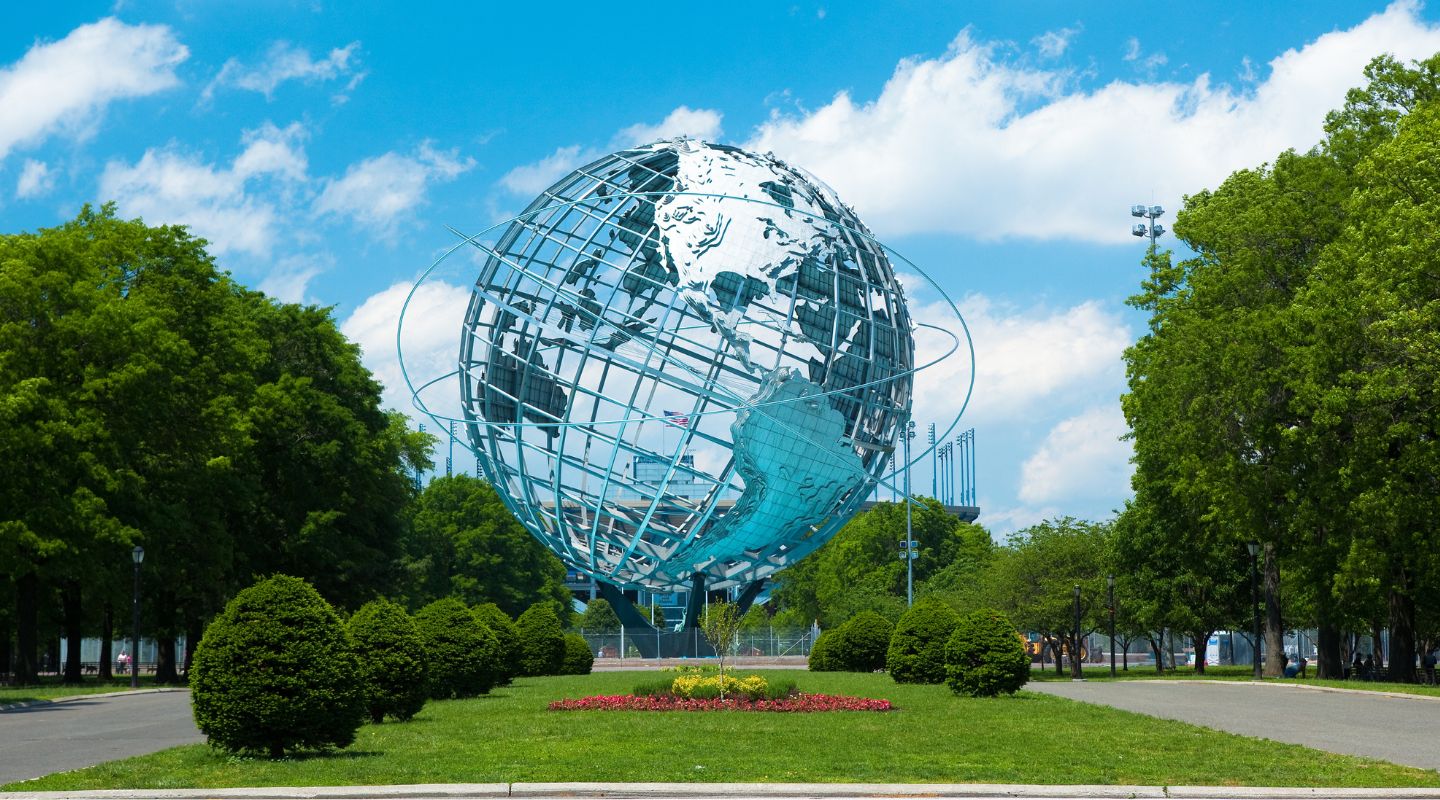 Flushing Meadows Corona Park is a beautiful park in Queens.

The key sites in the park include Queens Botanical Garden, the New York Hall of Science, and the USTA Billie Jean King National Tennis Center.

New York City is home to this and more parks. If you just moved to the city or are visiting, you can sample these parks to unwind, relax or exercise.

Each of the parks has different features and amenities; therefore, it should not be hard to find a park you like.

Discover the best attractions in NYC! Whether you're looking for world-class museums, stunning architecture, or simply great food, this list has you covered.