Real human bodies in sickness and health are on display in this remarkable exhibition. Learn about the human body's weaknesses, potential, and many of the difficulties it encounters in the 21st century. 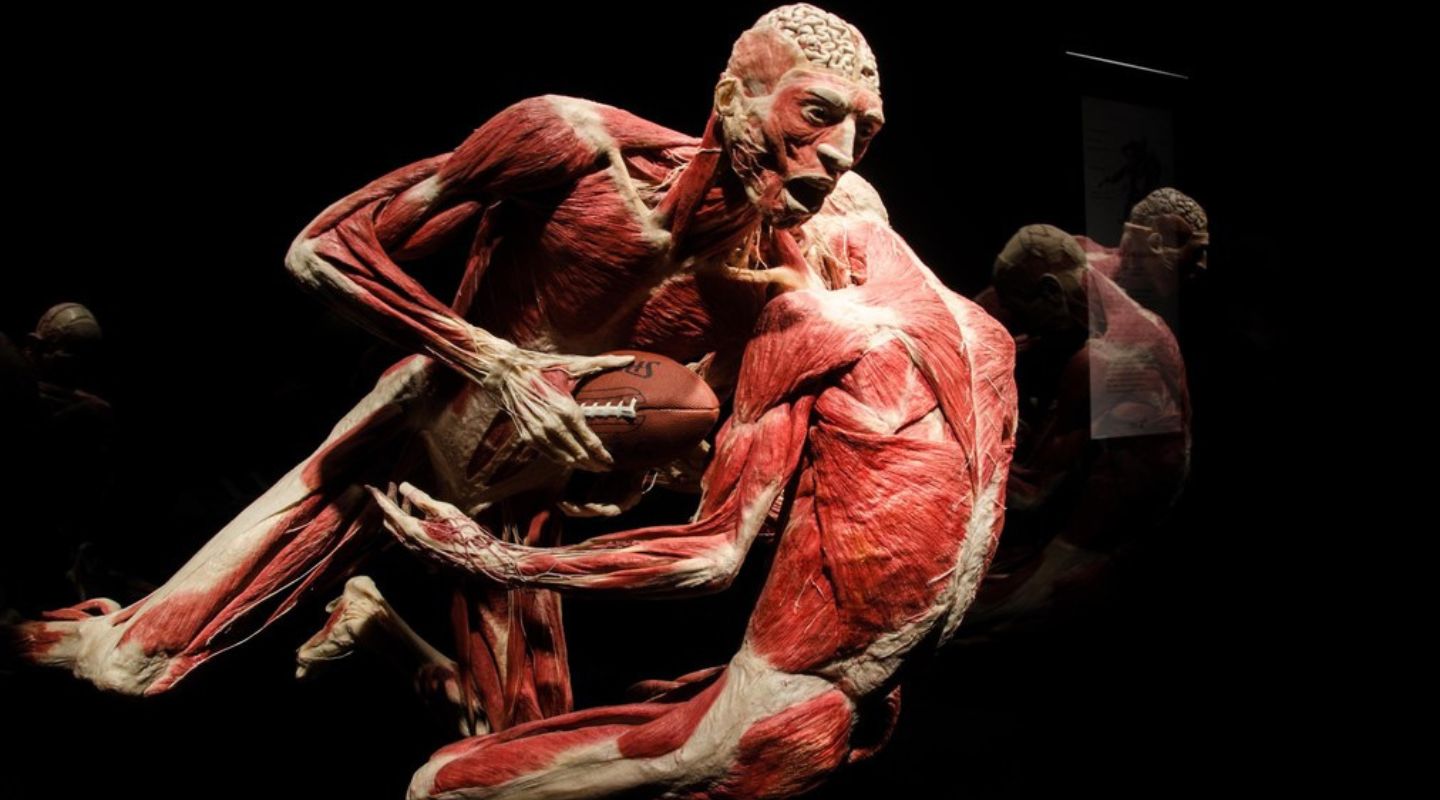 An opportunity to learn about human anatomy, physiology, and health is provided through BODY WORLDS: Pulse, a carefully designed exhibition that focuses on our bodies in contemporary life.

In galleries that highlight the various systems of the body, more than 200 plastinated specimens, including full bodies, body combinations, translucent slices, and organs, as well as 3D displays, are organized and displayed.

Among the plastinates in this generation are an obese body slice, a smoker's black lung, and hardened arteries that display the effects of poor health.

Several of these systems are highlighted below:

The Respiratory Section displays plastinated lungs, a larynx, a diaphragm, and a full respiratory system to demonstrate how the organs cooperate to supply the body with oxygen continuously.

This part also illustrates the negative effects of lifestyle choices like smoking, including images of smokers' lungs with emphysema and cancer, as well as their blackened lungs.

Skulls, joints, and upper- and lower-extremity musculature in the locomotive section show how our muscles work to produce smooth movements.

A torso with a scoliosis-impacted spine, broken bones, and an osteoporotic knee joint show possible issues with the locomotive system. Information on how injuries might be prevented is also provided.

Visitors can explore specimens such a whole digestive tract, the thoracic and abdominal organs, a pancreas, a liver, and the lining of the stomach at the Digestive Section.

Here, a fatty liver, liver slices with metastasis, the arrangement of the hepatic arteries, and a slice of a fatty belly are used to illustrate digestive system complications and disorders.

Embryos, fetuses, reproductive organs, and a pregnant woman are used to show the conception and development of life in the Reproduction Section.

The anatomy and physiology of fertilization are illustrated in a distinct, restricted region inside this section with body slices and two specimens performing the act of reproduction.

Interpretive panels address the relationship between sexually transmitted infections and fertility. No youngster under the age of 17 may enter this area alone; they must be accompanied by a parent or other adult guardian. 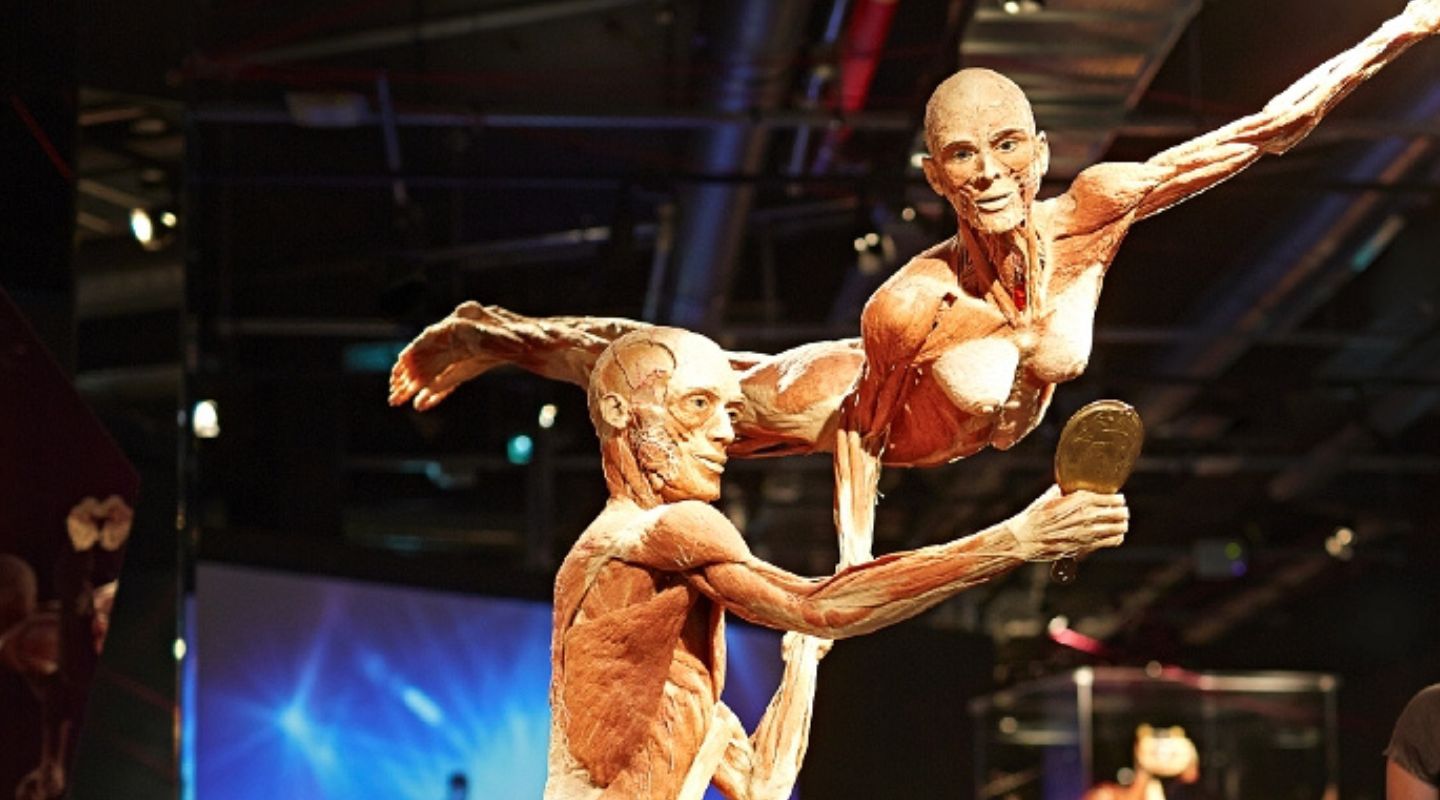 Body Worlds is a mobile exhibit that features dissected humans, animals, and other anatomical elements of the body that have been plastinated to preserve them.

The preservation was created in the late 1970s by Gunther von Hagens.

A number of Body Worlds anatomy exhibitions have traveled to numerous nations throughout the world, occasionally sparking debates concerning the use and display of actual human corpses and body parts.

It has not been independently confirmed by Von Hagens that all human specimens were taken with the donors' full awareness and agreement prior to their deaths.

The body donation program at the Institute for Plastination is where Gunther von Hagens obtained the specimens used in his BODY WORLDS displays.

More than 1,300 Americans, including 297 Californians, make among the more than 16,000 registered body donors at the Institute as of this writing.

Plastination, a technique that replaces the body's natural fluids with reactive plastics that are initially malleable but harden after infusion, has been used to preserve all of the specimens.

The specimens' plastic can be made harder so that they can be preserved in lifelike poses that show how our bodies react internally to common actions.

To find out more about a world that is both close by and far away, go to Body Worlds: Pulse at Discovery Times Square.

Visitors have the benefit of seeing what happens beneath the skin thanks to von Hagens' special polymer.

Viewers will get the opportunity to observe the human body performing regular duties in a robotic setting at this New York exhibition.

The stark visual difference between a healthy set of lungs and lungs from a smoker serves as an example of what happens when organs do not receive the necessary care.

This exhibition, which is making its premiere in New York City, will help you understand everything that happens just below the skin.

What is body worlds?

The Original Exhibition, the first of its kind, educates visitors on anatomy, physiology, and health through the use of actual human bodies that have been preserved using the Plastination technique, which was developed by Dr. Gunther von Hagens in 1977 while he was an anatomist at the University of Heidelberg.

The world's most popular traveling exhibition has been viewed by more than 52 million visitors in more than 150 cities across the Americas, Europe, South Africa, Asia, and Australasia since the series' debut in Japan in 1995.

What does body worlds show?

The exhibition's stunning plastinates transport viewers on a thrilling journey of subcutaneous exploration. It offers a thorough understanding of the human body's physiology and anatomy.

By contrasting the functioning of healthy and damaged organs, common diseases are also simply comprehended and described.

They exhibit the mechanics of artificial knee and hip joints as well as the long-term effects of illnesses and addictions, such as smoking or drinking.

Why is it important for the public to see these exhibitions?

The people behind body worlds think that individuals are more inclined to choose healthy and sustainable lifestyles when they are aware of how the body functions and how it can malfunction.

Additionally, we hope that it will motivate people to find out more about the biological sciences.

Everyone should have access to the fundamental life science knowledge of what the human body looks like and how it works.

To make sure that educators and medical professionals get the chance to see the exhibition, we will actively engage with them throughout the length of the exhibition.

Now that you know about some of the top attractions in NYC, be sure to check out the list below for more information on what to do and see in the city!