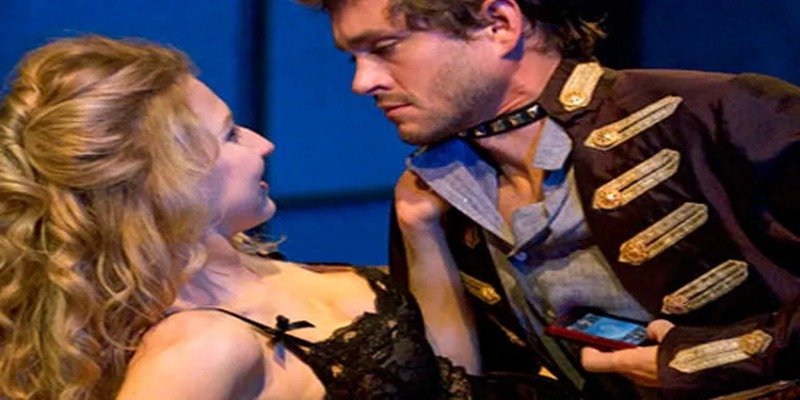 This season on Broadway, Venus In Fur is cranking up the heat with a beautifully presented psychosexual tale that's sure to liven up any date night.

This isn't the Lion King, so theatergoers hoping for a Broadway experience in the Disney vein should search elsewhere. Hugh Dancy, a seasoned British actor, and acclaimed newcomer Nina Arianda feature in this hot new play that centers on love, sex, power, intrigue, and even a little light whipping. (The tagline, "A Play So Good It Hurts," gives you your first indication that this play is unlike anything else you'll see on Broadway.)

The playwright/director Thomas' Venus In Fur tells the tale of Vanda, a seductive young actress (Arianda) who is vying for the main role in an exciting new play (Dancy).

Vanda messes up her audition by being late, so she tries to charm her way into reading for the part. What comes next is an engaging cat-and-mouse story with just enough suspense (and some S&M) to keep audience members trembling in their chairs.

Critics have heaped praise on this new play by David Ives, which is being directed by Walter Bobbie, who helmed the Tony Award-winning revival of Chicago.

For her work in Venus In Fur, Arianda received New York Magazine's "Star of the Year" award. The New York Times complimented Arianda, who made her Broadway debut in a revival of "Born Yesterday," calling her "incandescent," "electrifying," and "the best physical comedian the theatre has produced in some time."

In spite of Arianda's ferocious stage presence, Dancy keeps up. In "Martha Marcy May Marlene," Dancy played Ted; in "The Big C," Showtime, he played Lee Fallon. These are the roles for which he is best remembered.

In other words, Venus In Fur guarantees to kindle a fire under your velvet-covered seat if you're searching for a theater experience that's as sensual as it is enjoyable.

Last but not least, this drama is about power. Who possesses it and who does not. Do you ever exploit your sensuality to get your goals?

Check out the list of shows and events in NYC below to find something that interests you! We know you won't be disappointed.