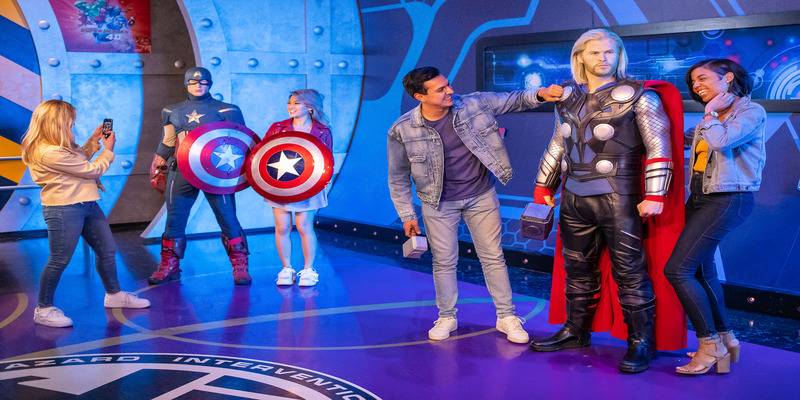 Avengers fans are drawn to Madame Tussauds by Marvel Superheroes.

For "The Avengers" fans, witnessing all of the most recognizable superheroes from Marvel Comics in real life is superior to seeing them all in 3D.

The Hulk, Spider-Man, Iron Man, Captain America, and Thor can be seen up close in the new interactive exhibit "Marvel Super Heroes 4D Experience" at Madame Tussauds New York in Times Square for fans of the blockbuster movie (and the comic book heroes who inspired it!). This multi-level experience at Madame Tussauds is the next best thing to seeing the cast of the new film in action.

Visitors approach the exhibit down a lengthy hallway and proceed downstairs to the secret command center where they can unlock their powers with their favorite heroes. This interactive experience was created by Madame Tussauds New York in collaboration with Marvel Entertainment.

Bret Pidgeon, general manager of Madame Tussauds New York, adds, "We're bringing the Marvel Super Heroes that so many of us grew up with to life." Young and old Marvel fans will now be able to see, interact with, and stand next to their favorite heroes.

In the "Opening Night Party" display at Madame Tussauds New York, which features all of your favorite Hollywood actors, including Samuel L. Jackson (who plays "Nick Fury" in "The Avengers"), wearing his famous Kangol hat, you may also find wax sculptures of some of "The Avengers" A-list celebrities.

So which Marvel character would you like to mug with the most? Visit attractions in NYC below and have the best time of your life!